DENVER, CO — A new study shows that a novel, nonsurgical approach to treating vocal cord dysfunction (VCD) can help 3 out of 4 adolescent athletes, who did not respond to conventional therapy, breathe better during training and competition. Vocal cord dysfunction (also known as exercise-induced laryngeal obstruction) is a common condition characterized by the throat inexplicably closing during rigorous exercise. It can dramatically increase breathing difficulty, diminish performance and often causes panic in those who experience it.

“It’s terrifying for these patients. Imagine running a race, then being forced to breathe through a straw on your last lap. That’s essentially what it feels like for these athletes,” said Tod Olin, MD, MCSC, principal investigator of the study and director of the Pediatric Exercise Tolerance Center at National Jewish Health in Denver.

Because the symptoms of VCD are similar to asthma, patients are often misdiagnosed and many are prescribed steroids and other medications that simply don’t work. “Ultimately, these athletes often quit their sports out of fear or frustration,” said Dr. Olin. “In some parts of the world, they are treated with surgery.”

In an effort to better treat patients who did not respond to speech therapy, which is considered the first line therapy, Dr. Olin developed a novel approach that involves visual biofeedback, training in specific breathing techniques, and feedback regarding performance psychology. “In addition to the mechanical changes in the throat, almost all of these athletes have thoughts during exercise that are working against them. Therapeutic laryngoscopy during exercise creates and opportunity to address both mechanical issues and performance psychology issues,” said Dr. Olin.

With therapeutic laryngoscopy during exercise, Dr. Olin fits patients with a helmet that has a small camera attached to it. The camera is fed through the patient’s nose and positioned just above the throat. Once the camera is in place, patients then undergo a strenuous workout on a stationary bicycle. With real-time throat images from the camera, they can learn to control their throat’s effect on breathing.

“For many of these athletes, visualization and film review are part of training,” said Dr. Olin. “I think of therapeutic laryngoscopy during exercise as a highly-specialized teaching tool to cure a problem that is very difficult for patient to otherwise conceptualize.”

“Most athletes can control their breathing without any trouble while they are in a chair. The challenge for patients with this condition is to control breathing during intense exercise,” said Dr. Olin. “During our sessions, I work with patients while they are pedaling as fast as they can on a bike or while running up to 14 miles an hour on a treadmill. That way they can learn to use these techniques under intense, but real life situations.”

In a recent study published in the journal Pediatric Pulmonology, Dr. Olin tested the approach on 41 adolescent athletes with VCD, who had not responded to other interventions. He found that 75 percent of the patients perceived improvement in breathing during strenuous exercise, and 85 percent called the approach the most important therapy they had undergone to achieve breathing improvement. The approach also represented the first time many of these athletes were made aware of the psychological aspect of their condition.

“The difference has been night and day,” said Tyler Evans, a 24-year old professional triathlete who trains at the U.S. Olympic Training Center in Colorado Springs, Colorado.

Evans was diagnosed with asthma as a young child, and had always assumed his symptoms were asthma-related. “I’ve been on steroids and have carried a rescue inhaler with me to every event I’ve ever attended,” said Evans. “But the problem kept getting worse and worse.”

Desperate for a diagnosis, Evans saw numerous doctors in Colorado, New York and Cleveland, who suggested he suffered from everything from acute asthma attacks to a heart condition. Some suggested he undergo surgery to open his throat more completely, but that would mean weeks of recovery and delays in training.

In August of 2016, Evans made an appointment to see Dr. Olin at National Jewish Health. “He knew it was VCD right away, and immediately started working with me on breathing techniques,” said Evans. “It was almost anticlimactic. Here I thought I was dealing with a career-ending condition, or maybe even something that was life threatening.”

Since working with Dr. Olin, Evans said his times and performances have improved and he is competing at a higher level. “I was just hoping to get a handle on the symptoms,” said Evans, “but ended up being more confident and more efficient in competition than I’ve ever been. It’s made a remarkable difference.” 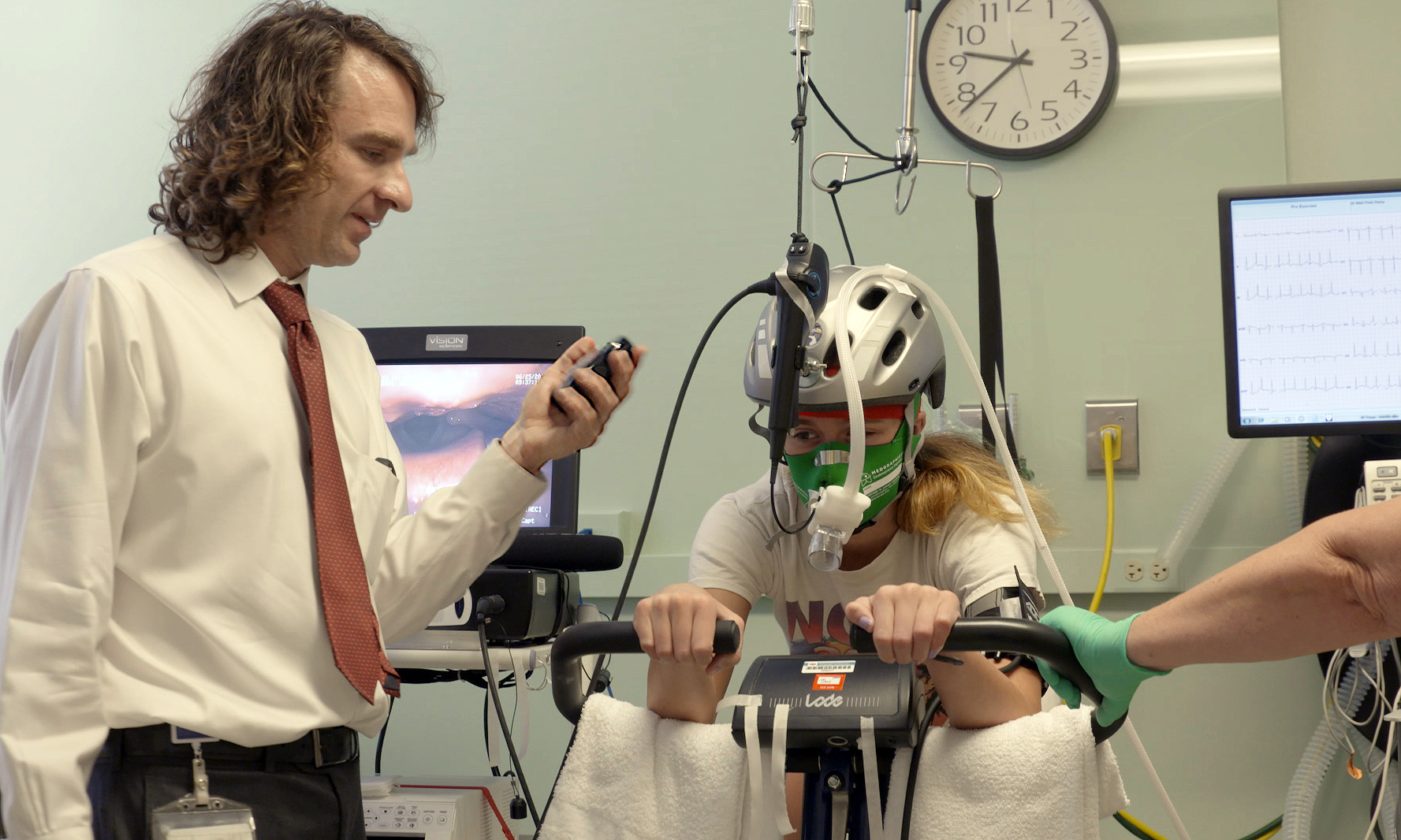 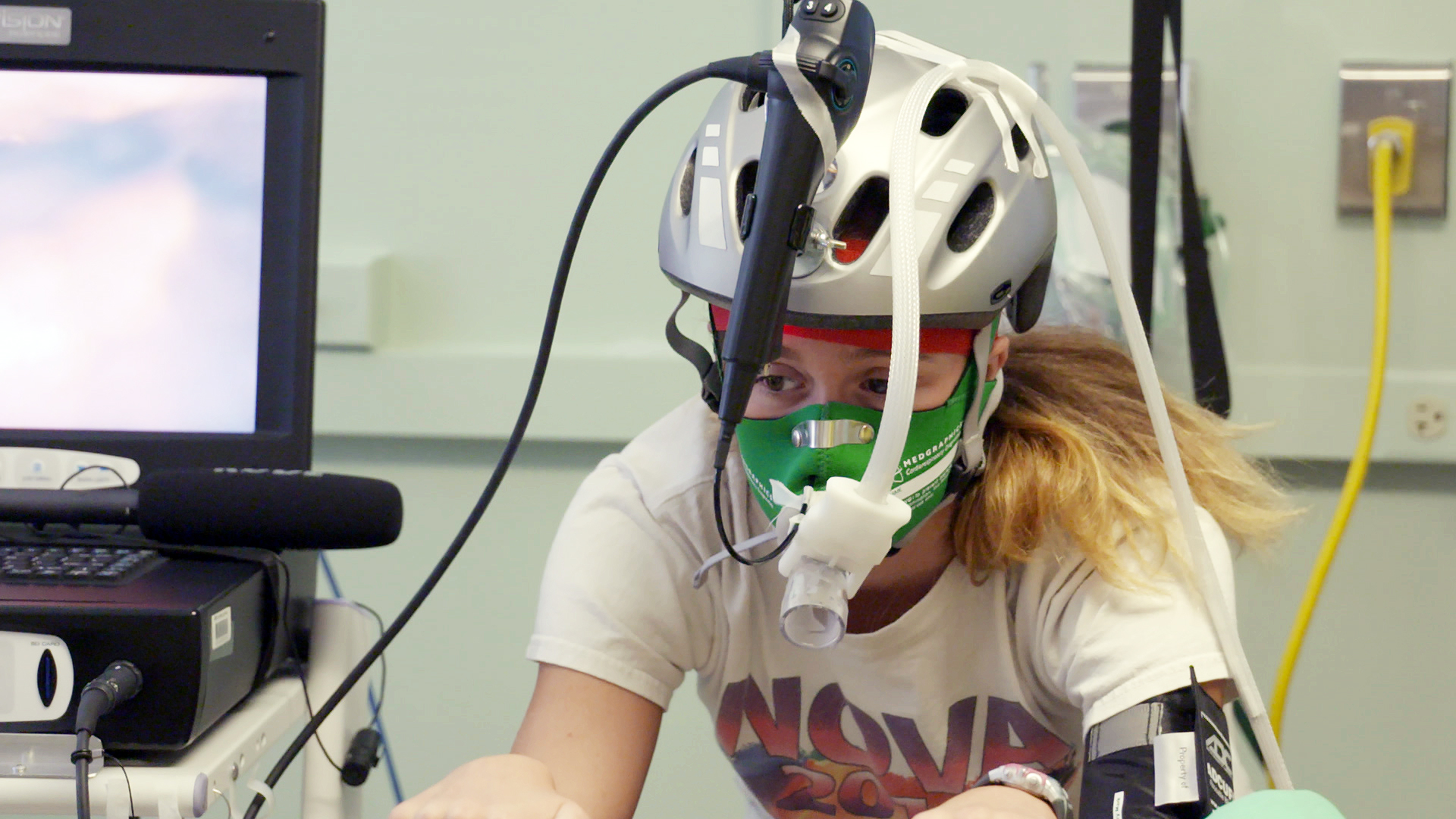 A young athlete is tested and treated at National Jewish Health in Denver for vocal cord dysfunction, a fairly common breathing disorder that causes the throat to inexplicably close during strenuous exercise. 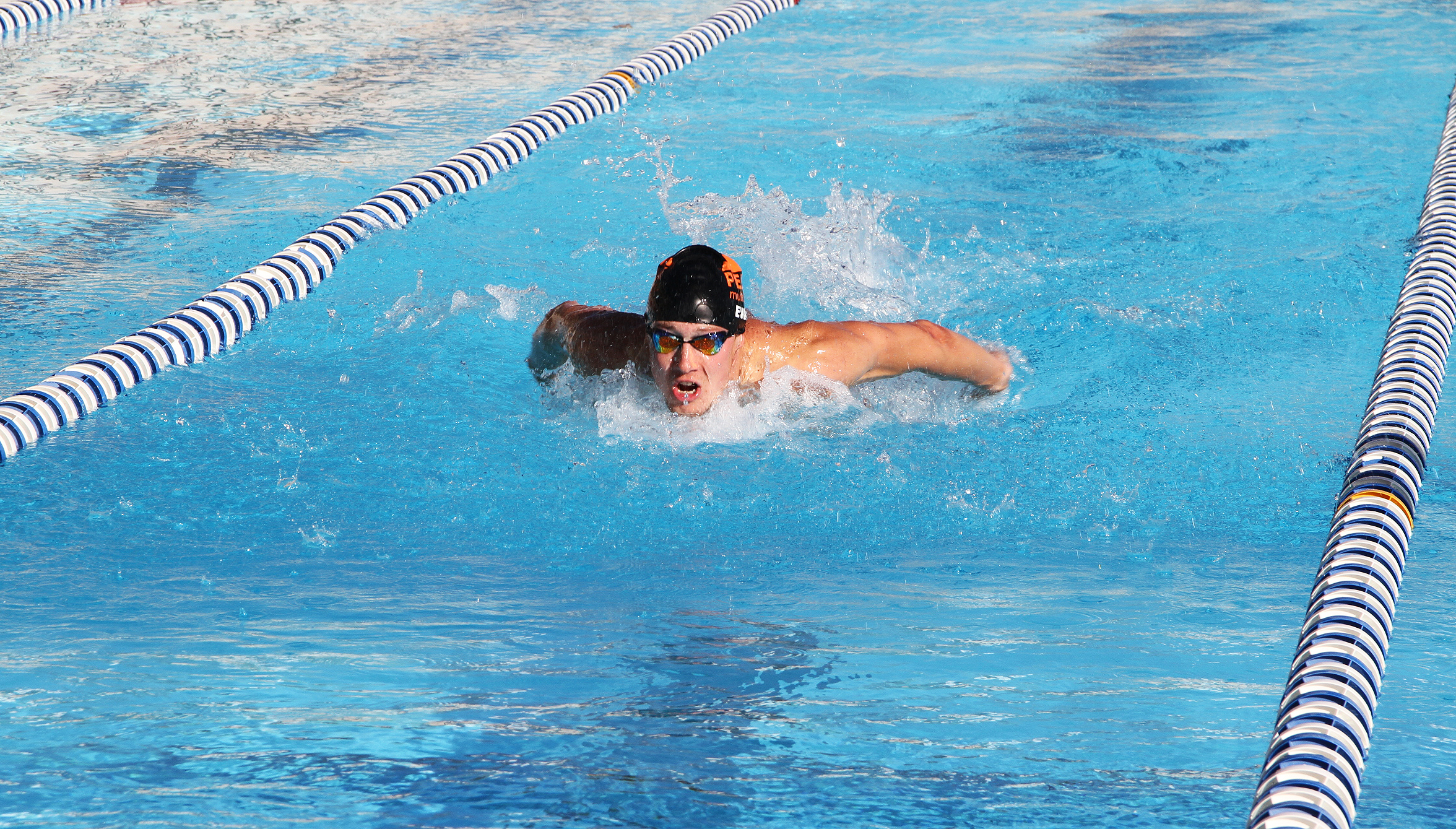 Tyler Evans trains as a triathlete at the U.S. Olympic Training Center in Colorado Springs, Colorado. Evans was recently treated by doctors at National Jewish Health in Denver for vocal cord dysfunction, which caused Evans` throat to narrow during rigorous exercise. 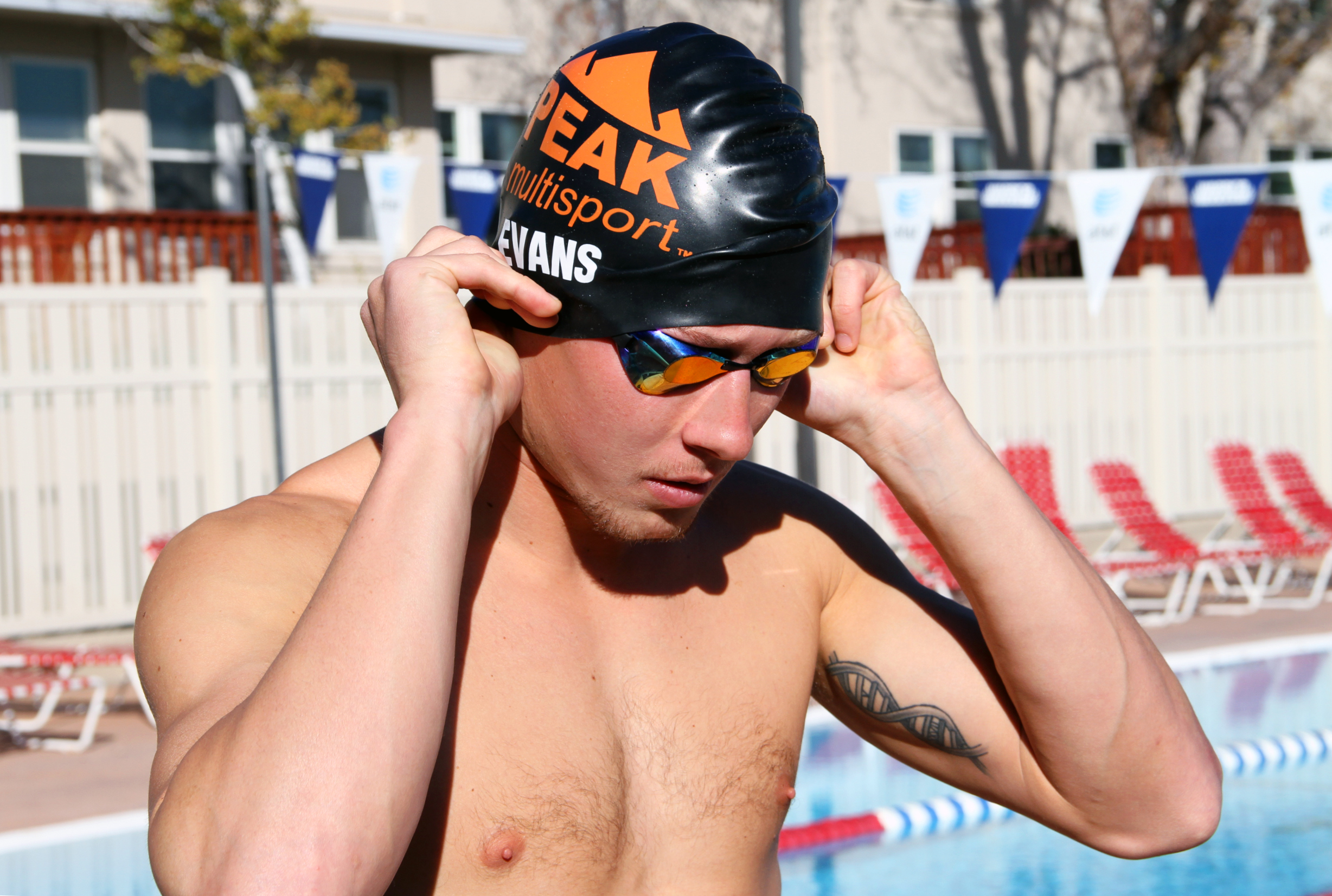 After seeing several doctors who treated him for everything from asthma to a heart condition, professional triathlete Tyler Evans was diagnosed with vocal cord dysfunction and treated at National Jewish Health in Denver without the use of medications or surgery. 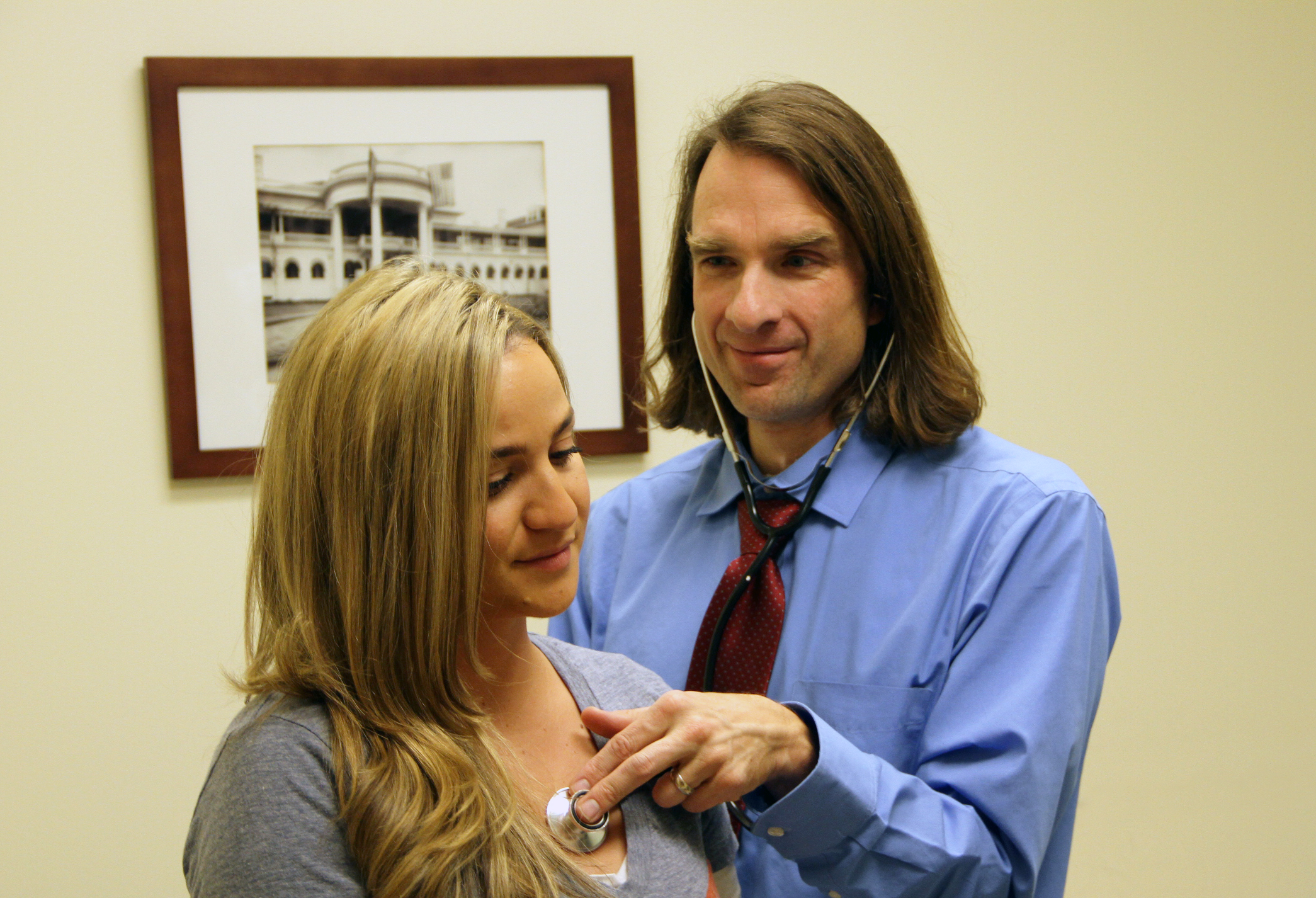 Tod Olin, MD, MSCS, examines a patient at National Jewish Health in Denver. Dr. Olin has developed a novel therapy to treat a serious breathing condition known as vocal cord dysfunction without the use of medication or surgery. 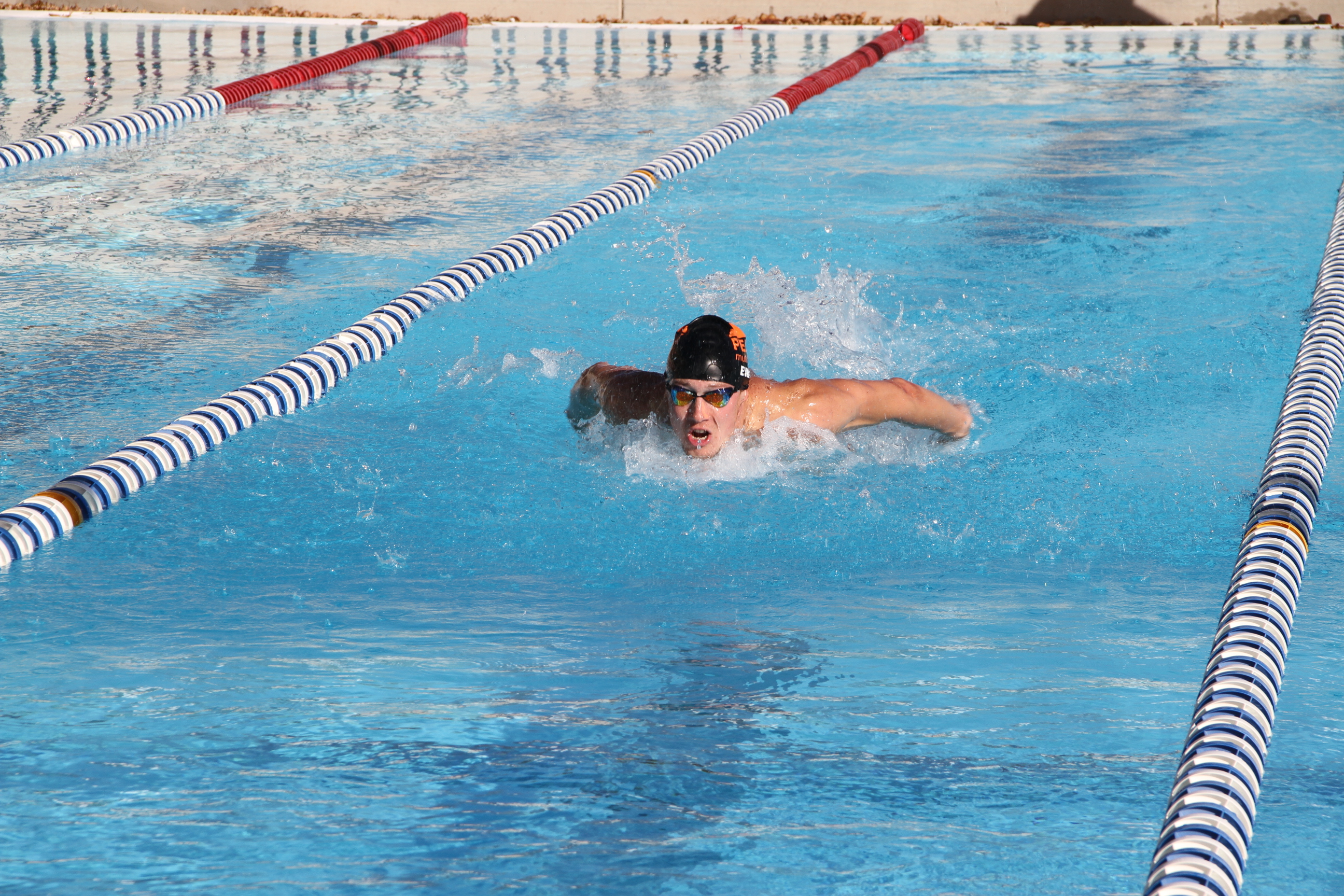